Saying a lot of 감사합니다

I knew as soon as we started exiting the stop at Jegi-dong Station that we were in for a fun adventure.

I know I am both blessed and lucky, as well as, yes, even perhaps a bit spoiled to be able to be here, in Korea, without worrying about, well, really much of anything. How many people get this kind of opportunity? I want to suck every little bit of it right through the biggest straw I can find and make sure that I say "YES" to all the little and not so little things that come my way. At the same time, my professor is, in fact, professing. He has a job to do here and I don't want to get in his way, you know? And, let's face it, I am a rather independent person when it comes down to it. I just like including him in on the adventure if he wants to come along.

Which is what happened yesterday. As I was mentioning, when we started exiting the Jegi-dong Station in Seoul, I knew, straight away, that we were in for an adventure. We were, by far, the youngest people in the station by about a good 30 years. It was filled with very old Koreans who all seemed to have a variety of ailments. This was not a huge surprise to me because the whole reason we had come to this specific part of Seoul is that it is the location of the Yangnyeongsi which is the traditional Korean medicine market. Above that subway station, winding through the streets, were over 1,000 herbal medicinal clinics and dispensaries of all kinds. There are all kinds of practitioners who are selling a variety of fresh and dried herbs and tinctures and who are willing to consult with you, right on the spot, to concoct a remedy or tea or prescription for whatever it is that may be causing you trouble.

I was in heaven.

My little Dreamsweet heart burst with such excitement and what made me particularly happy was that as I walked from shop to shop I actually was able to recognize the various herbs sorted in their huge baskets that were for sale.

I realized, quickly, that herbal medicine, like love, really can be a universal language. Koreans have been practicing their form of herbal medicine for over 600 years and over 70 percent of all herbal transactions happen right here in this part of Seoul. My professor and I were absolutely the only non-Koreans present yesterday and I know we were quite an attraction, but I was so happy to chat with more than one shopkeeper and actually do some business. I want to make a medicinal kombucha while I'm here (for both me and the professor) and wanted to get specific herbs for it, as well as find some other herbs that would aid in my own quest to rid me of a parasite. Through broken Korean and a lot of gesturing, I was able to explain what I needed, but more importantly to me, why I needed it. And I got exactly what I needed from not one, but three different shops. It was just lovely and also, well, kind of magical. Deep down I know that I know this stuff. Sometimes, I just forget that I really do know this stuff. But being there, standing still, surrounded by all those herbs and their powerful energy, I knew that I still speak that language. And it still really speaks to me.

We had an even more gracious surprise when I insisted that we walk back to the subway by crossing to the other side of the street. There we found a museum dedicated to the History and Culture of Herbal Medicine in Korea. It was a very complete museum and we were given our own docent who made certain we truly saw everything. What I most appreciated were the very old acupuncture tools and all the various herbs, plus how she kept showing me the difference between Korean herbs and Chinese herbs. Earlier in the market, I had actually insisted upon buying Korean herbs instead of Chinese and that was a very personal choice on my part. I wanted local herbs, of course, but also I have also learned from my many years of herbal practice, that the herbs from China just are not very good quality.

At the end of our tour at the Museum, we were given tea and gifts (a very Korean thing to do) and then we were also both given a health analysis. Again, this was a gift and a surprise! We learned that according to Korean Traditional Medicine the Professor is Soyangin and I am Soeumin. I honestly was surprised to learn this about myself as I imagined from all my time getting acupuncture that I would be Taeyangin. And, as our docent said, perhaps I really am and yesterday was just a day where my qi was showing something different?

Full of that adventure and new knowledge, the professor and I headed to Hongdae to find some lunch. Late lunch. But we were in for such a treat.

Last March, when we were in London and Paris, one thing we ate quite a lot were falafel. It's an easy meal to eat when you're vegan/vegetarian and traveling because you can sort out quickly if it truly is what it is AND it also allows me to avoid the dreaded avocado (usually). Yesterday, in Hongdae, we headed to a restaurant called Jack and the Bean. It serves falafel in a variety of ways. Korea is not exactly the hot spot for falafel. But what struck both of us, immediately, was that on the wall in THIS restaurant were photos of the two falafel spots in both Paris and London where we had eaten in March! Those two restaurants are not related to each other or to this one. All three just happen to serve falafel. And, well, the professor and nakedjen. They also are all quite DELICIOUS.

Once we ate, we wandered all over Hongdae and took pictures of street art for the professor's upcoming class, admired lots of the lively vintage stores, chatted with many shopkeepers, I got to love a huge sheepdog, we snuck through back alleys, the professor ate some sort of crazy fish cake concoction stuffed with ice cream and custard and chocolate skewer of grapes and pineapple because, as I mentioned to him, you only live life once and you have to do the things you want to do in this life when you have the opportunity and not say, "Oh, maybe next time..." because what if there is not a next time? and then I actually took my own advice and ate some Korean street food, too. It was a hot donut kind of thing, my professor says it is a hotteok, that had been dipped in honey and OMG. I feel like I need another one. And then another one. I also said to my profesor as I was literally INHALING IT that what would be great was if it had walnuts in it and he told me it sometimes DOES have walnuts in it and now I feel like I have to go find the ones with walnuts in them. I mean, for research purposes. So I can share with you if they're as good as I think they should be. 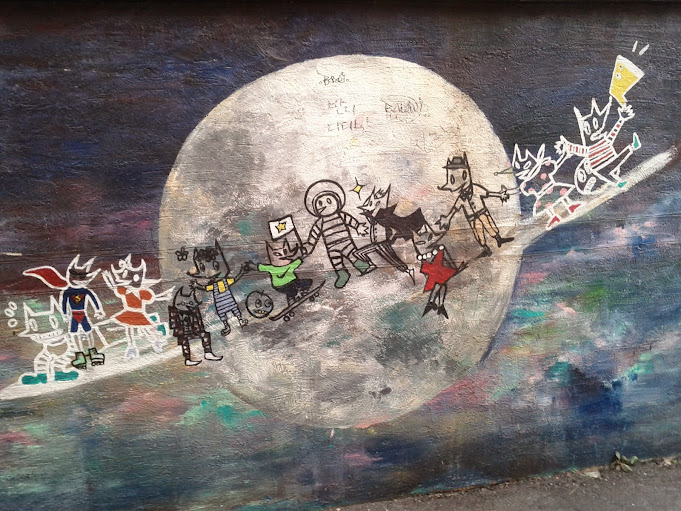 We got back on the bus, eventually. Did I mention the bus? There's a bus that takes us from the University here to the University there. And it's rather civilized and seems the way to go if you're wanting to go from here to there to have an adventure and suck everything you can through the straw in all the days that you're here. Because, honestly, how many people really do get this kind of opportunity?

Before I write another word, the first thing I must do is wish a happy birthday to Lydia. I know most of you do not even know who Lydia happens to be, but I will share with you that she is one of the reasons I happen to get up every morning with a smile in my heart and show the world all the love that I feel. She's that friend you can call at three in the morning who will answer the phone and actually will get out of bed and bring you M&M's to eat after she's bailed you out of jail. Or, you know, will drive 3,000 miles because she didn't think you sounded quite right on the phone and she thought you might need some company. She's THAT friend. The one who shows up.

She also will tell you that I am THAT friend, too. My world collided with her world a very long time ago and we've been best friends ever since. I wish I could tell you that we've been inseparable, but that would not be accurate, at all. Still, I can honestly say that on this day, half a century ago, Lydia decided to bless all of us by choosing this planet to land on and this planet has not been the same since. She's the one who will happily grab the microphone and sing the loudest no matter what song happens to be playing. Lydia's the one who is your biggest cheerleader at whatever sport you're playing, but especially if it happens to be Steeler's football. She will absolutely throw you a parade, if you need one, and maybe even if you do not and she's always happy to invite you to take a spin across the dance floor. But what she's best at, honestly, is love. Unconditionally.

I was not making that up about getting up in the morning with a smile in my heart because of her. It's been over 30 years since she started shining in my own little orbit and I am so grateful for that light. Every.single.day. So, happy birthday, Lydia-Jane. May this spin around the sun be your most magical, love-filled and hopeful one, yet. I love you the most. I really and truly do.